The King of Fighting Anime

We all know Dragon Ball Z is the greatest fighting anime of all ti- woah, I’m sorry guys I was just messing around, that was a lie, like that cap was so bad, I bet you were laughing, haha, check out the grin on your face, no? Okay. For years the anime world has had this massive argument, since the dawn of the first weeb, the question has been which is the best fighting, action themed anime ever? Well today ladies and gentlemen I seek not to answer that question, but rather add more bad blood to it, behold on the left side we have all your average anime thinking they’ve got good fight scenes so it makes them think they’re good but really they’re not, and on the right side of the ring the holder of the best anime meme(s) of all time, Fist-OF-THE-NORTH-STAR!

It’s one thing when an anime holds the title for one of the most iconic memes ever, hold up Dio fans I already made a blog about you, but it’s another thing when the anime itself lives up to the par standard set for it by its respected meme and Fist of the North Star by far delivers I mean before you even know it, you’re in love with the show, ha, see what I did there, see? Fine. The question though is why do I stand by the point of it being so better at just raw fighting, I mean, the story is cliché and the fight scenes are absurd, lord knows they are just downright insane, but hey some of you guys think anime characters shooting blue magical blast wave thingies from their hands is normal and cool, so I bet Fist of the North Star will fit in just fine on your list of anime to watch, but that would be injustice to an anime such as this, to simply just add it to your list is blasphemy, this should be put at the very top! A show that once ran the pages of Shonen Jump in the 80’s and later adapted to a 72 volume manga and not far after adapted to anime this anime is something that deserves way more then it's made out to be, it was born back when anime was still finding its footsteps and was out before anime became the monolith it is today, this anime was the Senpai of Dragon Ball as this was one of the anime it took its inspiration from so in truth this show could be considered the Granddaddy of modern action anime.

Story wise the show does not disappoint, I mean it’s an anime from the 80’s since when does an anime from the 80’s have bad storyline, yeah I’m looking at you Project A-ko, Fist of the North Star’s plot is amazing and of course like all 80’s shows the author figures it out along the way before actually sitting down and saying to themselves I know exactly what I’m doing now, and yet the viewer is left completely unaware of this and feels everything the creator is doing is profound and well thought out, and that’s what makes the show that good, that even if it’s done on improv it can still feel so good to watch our protagonist use his amazing punchline, speaking of cast, Fist of the North Star boasts a cast that is still seen as one of the best and most robust in anime today, they even boast a antagonist in Ra-oh that is seen as the most formidable villain in all of anime & yet the character development and relationship surrounding each and every character is far from forsaken as each individual is so fleshed out that you can tell and imagine how they came to be and where they’re headed, there’s never a sense of a character feeling overused or too boring plus you never feel as though their development is wasted or even not there at all no matter how brief their stay is, even in regards to that characters never overstay their welcome, you’ll draw out your favourite character and be left with a satisfying yet heart gaping please don’t go moment, damn I miss you Juza.

Fist of the North is an amazing show and a gem in anime history and would it have been able to hold its own if it were released in modern day anime? Absolutely not, you see this is the underlier, Fist of the North Star at its time was revolutionary, everything about it was, amazing and simply groundbreaking, but the aspects that made it revolutionary are so common in modern day anime, to the point where it’s been improved on and refined and I wouldn’t say perfected but it’s somewhere there, the show can be the source of all action and fighting anime but anime has reached a point where the student has become the master, well the master in all but one field, cause after it’s all said and done, put Goku, Jotaro, Madara, Jiren, Luffy, Ichigo, Midoriya or whoever you want in a ring, I bet you they’ll be dead before they even know it. 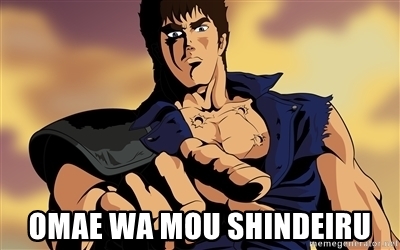 Well then since I've added my two cents into the fold of what a good anime should look like, rather than flame me later for writing the truth, you could just head over to our online website and check out our manga and anime merch selection as a peace offering from me.